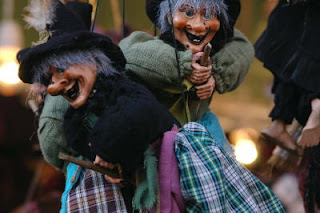 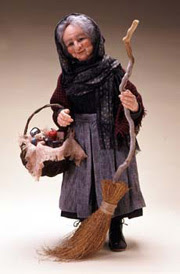 A few years ago I happened to be in Italy right before Christmas. Everywhere I went the street vendors and shops were selling Christmas related ornaments. I saw lots of Santa Claus, known as Babo Natale in Italy and the expected Nativity Scenes. I also kept seeing something strange, witches on broomsticks. At first I thought they were leftover Halloween ornaments, but there were just too many and I finally had to ask why people were hanging up witches for Christmas.

The story is that La Befana was asked by the three wise men to go with them in search of the baby Jesus, but she declined saying she had too much housework to do. Later she changed her mind but couldn’t find the 3 wise men. So now every year she rides her broom delivering goodies to children in hopes that she will find the Christ child and be able to give him gifts.

It became obvious to me that La Befana is mostly used for trying to scare bad children. While you will see a few representations of her as a kindly looking old woman the vast majority show a hideous “old hag.”

I never did get to buy one of the La Befanas while I was there. I seemed to always be rushing around and not have the time. Makes me sad, I would like to have a witch to hang up for Christmas.
Posted by Unknown at 1:59 AM