Many thanks to dia sobin who shared this link of paintings by surrealist artist Leonaora Carrington, who passed away recently: Leonora Carrington.

Her paintings are beautiful. Some of them remind me of Tarot cards, others, of esoteric alien-abduction-ET realms, even though, I am quite sure, that was not Carrington's intent, I'm simply saying they remind me of that a bit.

The Orange Orb: The USSR Cause for Roswell? - Muddled Disclosures

Thoughts on Annie Jacobsen's Area 51, which is always a little weird, commenting on a book I haven't read, still, here it is: The Orange Orb: The USSR Cause for Roswell? - Muddled Disclosures
Posted by Regan Lee at 1:28 PM No comments:

The Orange Orb: From Whitley Strieber:| Sinister Forces in My Life

The Orange Orb: From Whitley Strieber:| Sinister Forces in My Life
Posted by Regan Lee at 1:25 PM No comments: 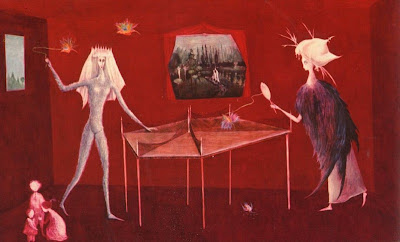 British painter Leonora Carrington, one of the last surviving artists from the golden age of Surrealism, has died aged 94 in her adopted home of Mexico City, where she had lived quietly for decades.
Mexico's national arts council said Carrington died on Wednesday night in the Mexican capital. Local media reported she died of pneumonia.

An arresting beauty in her youth who became famous for her paintings of women and mythical beasts, Carrington was embraced by the Surrealists in the late 1930s, when she had a passionate affair with German artist Max Ernst.
Viewed as a national treasure in Mexico, her eccentric bronze sculptures dot the capital's main avenue Reforma. One piece was ripped from its bolted base and stolen from a public exhibition in 2000, though the thieves later abandoned it.
"She created mythical worlds where magical figures and animals predominate. Cobras become goats, crows transform into blind spirits and inhabit trees and houses," Conaculta said in a statement. "They are images that emerged from a mind obsessed with representing the transcendent reality we live in." 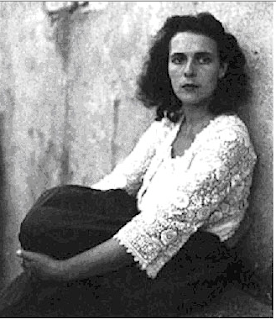 Here's more on Ms. Carrington, from Encyclopedia of the Exquisite: Nobody's Muse.


I didn’t have time to be anyone’s muse,” said Carrington. “I was too busy rebelling against my family and learning to be an artist.”

Mad Henry Makow is really going at it. As if the previous article wasn't enough; now this from Peter Tesky. Women Today are "Whack Jobs": Women Programmed to self-destruct; Feminist Cultural Leaders are Traitors. I could comment endlessly but it speaks for itself, as in:


"Most women are confused, anti-social, filled with anxiety and fear, and when you approach them, they treat you like a predator or a pervert. Those who are friendly only want sex, even if they're already in a relationship, or worse, already married."


Then there's the feminists and the lesbians, usually they both go hand in hand.

It seems most women don't like being "harassed" by men anymore,

And he ends with the Makow doctrine that everything wrong with the world (you know, like Jews, lesbians and feminists) is done by the Illuminati:


The crimes against humanity by Illuminati social engineers in the name of freedom and equality are mind boggling.

In this two hour interview with host Jerry Avalos, I dig deep into my experience vault to reveal details of nonconsensual medical and scientific experimentation as well as being in covert programs with supersoldiers on both sides of the pond, Aaron McCollum and James Casbolt. Riveting details of recovered memories are revealed that have never been written or talked about publicly as well. Highly recommended listening. A special thanks to Jerry for letting me speak my truth.
Click on the title for the interview.
Posted by Anya at 6:01 PM No comments:

Fortean Sexuality: "I Married a Lesbian"

When I saw this link on Rense.com: "I Married a Lesbian," I just knew it was from Henry ("Mad") Makow. I clicked over, and sure enough, toots, I was right! The article isn't by old Henry himself, it's written by Dan Abshear, but Henry has given the piece his A-okay.
There are soooooooo many things wrong, (and yet, sadly hysterically funny even if the latter is unwittingly so) with this article, beginning with the title of course. Then the sexist comment about the "...extremely rare and hard-to-find image of lesbians who aren't extremely hot." Implying of course that, well, lesbianism is kind of okay as long as the women are "hot" and getting off the severely fucked up hetro males viewing such images.
Oh, and then there's this:

She and I are 4th cousins as well.

She became "interested" in him when he was 21 -- how old was she? They're fourth cousins. They met when he was 14 . . . anyway, they marry, and he quickly wonders why his wife is "unresponsive" to him. Sex is not the thrill it  should be. So instead of asking her why she finds him repugnant he begins a program of self-improvement:

She was sexually impotent with me, and this puzzled me. So, I began to exercise very aggressively and intensely. This would include such activities as weightlifting and long distance bicycling.

While rather puny when I got married, I developed into quite a attractive and sturdy young man. This was all to please my wife and gain her affection. I improved my diet and continued these exercise habits until the age of 40.

Since this didn't increase her intimacy toward me, I began to wonder if she wanted me to make more money. The first six or so years of our marriage, I barely made more than minimum wage. We were very poor, and in debt.

And so on, him trying to find ways to make his wife sexually and emotionally responsive. No where does he write if he tried talking to her about these intimate issues.
Things go along for twenty years, including having a child, and hubby insists his wife seek therapy, which she does. Alarmingly, her psychiatrist breaks the rules of ethics and confidentially and tells him that:

... I visited the same psychiatrist. He told me that my wife was in fact a lesbian, and that it would destroy me in time if I did not divorce her.

Interestingly, our sex life actually improved a great deal. It appears that my knowing she was a lesbian may have given her some freedom.

And yet, the marriage fails, because, among other things, she "falsely" accused him of domestic violence. So the lesbian wife, er, ex-wife, moves out. Not, however, with her female lover, but:

And my ex wife has yet to disclose to anyone that she is a lesbian. She continues to live this lie. My ex wife presently has a boyfriend in order to continue the concealment. ..

I'm not sure what the point is, other than it appeared on Henry Makow's site, which is notoriously misogynist and homophobic, and such lurid stupidity reigns.
As usual, the majority of comments left at the end of the article are as scary as the rest of what gets thrown up there. Like this philosophical sharing from "Marcos":

One thing every man should know is that you never, never satisfy a woman by appeasement...


As Americans say, she is sh*t testing you, to check if you are really worth her relinquishing sexually to you. The answer is to show strength and dominance, and never the contrary, trying to please her, to be "nice" which is what most men do. This will only make the woman despise your weakness even more. . .


Understand that this unconscious, biological. Women need to be certain that they've got the best men her looks can "buy". If she feels irritated, frustrated around you (and still you are a good guy), she has doubts about her choice. When you assert your dominance, those doubts are gone. As Henry says, women need to relinquish power to the man, but only to those she admires. Women are hypergamous, i.e., they always go for the alpha male, for the powerful man. You must assure that you are this man.

Marcos left a link to his blog. Oh dear fucking god. Here it is, if you dare: Citizen Renegade.
Posted by Regan Lee at 8:35 PM No comments:

I am very wary of self-styled UFO Police and invite all (except uber psycho skeptoids) to play. Demands from some researchers that certain subjects or approaches within UFOlogy be rejected for whatever reason should be soundly mocked and utterly ignored. But there is something to be said for being coherent (as I'll comment later regarding Paola Harris) or being cavelair with information. We've been seeing a lot of this these days, from David Jacobs, Budd Hopkins, and many more before them, and we'll of course see many more after this.

I wasn't at this conference and can't comment directly. I've stood up for LMH in the past and she does deserve acknowledgement for her contributions. I do think she has her own view of what "all this" is, (most of us have our own views of what "all this" is) and that affects her spin on the stories she brings us. She's not the only researcher to do so.

By the way, if you visit Colin Andrew's site, and can find some way of contributing to his efforts, I am sure he will appreciate it.
Posted by Regan Lee at 8:44 PM 2 comments:

Deirdre O'Lavery has a post about her adventures in McMinnville. It was great visiting with her!

Yes, I have bunches of dowsers and pendulums, but at the conference one of the vendors had one that really caught my eye: 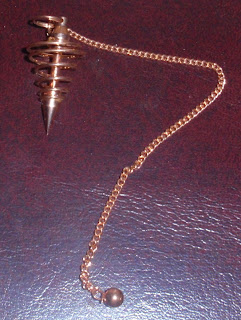 The first thing I thought was it is a Tesla coil pendulum!  Then I thought that isn't right because Tesla coils have tight spirals like this: 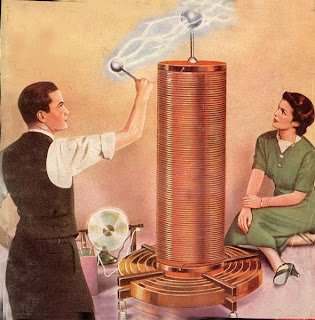 but I knew that it reminded me of some Tesla invention so when the conference was over I did some searching and came across this: 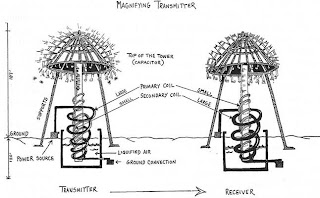 Tesla's drawing for wireless electricity transmitter/receiver.  I haven't been able to use the pendulum outside yet because of the spring winds, but I was sitting inside and dangling it and wondering if it was a transmitter or receiver or maybe both.  I jokingly thought that maybe I could call some UFOs using it.  Laid it down, forgot about it.  A little while later I went outside and I was just sitting there not even looking at the sky and there was a very loud plane I saw it flying over a little south of me (which makes sense as that is the normal flight path), but then when I turned back and looked almost directly overhead there was one of those damn orbs flying over.  It was going so fast that I only managed one photo before it was out of view: 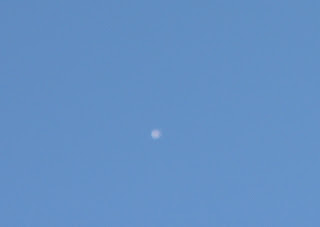 Seemed more than a little synchronistic after thinking about that while holding the pendulum.
Posted by Unknown at 2:37 AM 1 comment:

From :The Interstellar Housewife: Just a Few Things

Deirdre has a new post at Interstellar Housewife...looking forward to seeing her at the McMinnville UFO Fest!

The Interstellar Housewife: Just a Few Things
Posted by Regan Lee at 8:08 AM No comments: