In the current issue of UFO Magazine, (which is a great issue, very strange and out there -- in a good way -- ) Lesley Gunter interviews Jon Ronson, author of The Men Who Stare at Goats. Very interesting article; I appreciated Lesley's thoughtful and substantial questions.

The Nymphomaniac Vampire of Wolfgang Schloss

The Nymphomaniac Vampire of Wolfgang Schloss on SuperNatural ParaNormalities. I found this on the blog entries at The Daily Grail.

Visit The Orange Orb
http://orangeorb.blogspot.com
Posted by Regan Lee at 12:00 PM No comments:

I consolidated and slightly altered a few posts that I entered earlier today at my blogs UFO Mary and Octopus Confessional. The past month or so the world has been witness to some unusual events; signs in the sky, attempts at toppling authorities, and the implementation of control and fear from the infrastructure, who, I suspect, are responsible for such seemingly disconnected events. 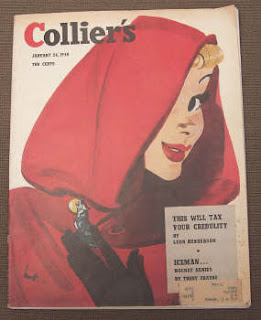 A strange incident, that seems odder still when juxtaposed with other odd events this holiday season; the attempted bombing of Northwest Flight 253 in particular.

Both incidents served to grab international attention during a time when many of us are vulnerable emotionally and spiritually; we're amped up at this time of year on many levels. Add to this mix international travel; people dependent on the whims and fates of weather, airport security, government, flight arrivals and cancellations. . .

The Pope, during the Christmas Day blessing, was attacked by a young woman in a red hooded sweatshirt. The woman had climbed over a barrier and managed to pull the Pope to the ground; however, the Pope was unharmed. Reports say the woman was mentally unstable. Interesting for the above reasons but also in context of the attack two weeks earlier on the Italian Prime Minister Silvio Berlusconi. Berlusconi's attacker, it's been reported, also has mental problems.

One of the things to emerge from these incidents --  the bombing attempt, the attacks on the Pope and Silvio Berlusconi --  is the reminder from authority of the need for tighter security. Homeland Security was lightening quick in its announcements for newer, stricter security edicts, which have already been put in place. Along with these even more restrictive rules is the urging of Homeland Security for the use of body scanners in airports.

As to the failed bombing attempt by Nigerian Umar Farouk Abdulmutallab, there's further support for the sleeper agent scenario: Abdulmutallab told authorities "operatives" in Yeman gave him the explosives. The US attacked Yemen on December 19th.

Whether intentionally planned by the Global Cabal (you know, "Them,") or the Trickster in our face, there are esoteric elements all over these events. Two mentally unstable people, a  woman in her twenties wearing a hood that's red, (Christmas color, blood, sacrifice, wanton woman,) the inept would be airplane bomber from Nigeria, (the Nigerian e-mail spam scams,) Christmas Day, (world peace, love, goodwill to men, religion. . . ) the Pope, (authority, religion, spiritual control, sexual control, Nazis,) the Vatican,(more control and authority infrastructure, hidden treasures and secrets, power, global presence) and Kafka-esqe rules that are, we're  told,to keep us safe, but really serve to humiliate and control.

These incidents seem unconnected and maybe they are; but they all happened on the global stage, during a time of global sharing and unity, and where travel is at its highest on a world wide level. Institutions were attacked: the Pope/Vatican, (and two weeks previously, Italy's PM, another authority) and an airline, directly involving Homeland Security.

The BVM Returns to Egypt
The BVM made an appearence  in Egypt this month:Virgin Mary appearing in Egypt?


Hundreds, if not thousands, have been lining up for hours every night at the Virgin Mary Orthodox Church in a Cairo neighborhood just off the Nile. Many of them claim that a mysterious light hovering above the church's domes is an apparition of the Virgin Mary who will bring Christian Copts prosperity and relief in a time of national and religious struggle.


The crowds began appearing Thursday evening when a number of residents spotted a flickering light. No one was sure where the illumination was coming from, and word quickly spread that the light took the shape of the Virgin Mary wearing a blue gown and standing in the sky between the church's two high crosses.


There is a video clip at the above link on Beliefnet.com, with a link to the following clip on YouTube:


The image shown reminded me of the BVM's appearence, which the article mentions,  in Zeitun, Egypt, from 1968 to 1971. Similar white, cut-out type figure, and pigeons. Pigeons are mentioned in the recent BVM apparition as well:


The scene on Saturday was huge when we saw the lightning and white pigeons flying around us. White pigeons always accompany apparitions like these," one Copt told The Times.


Watching the clip shown here, an orange light can be seen flickering off towards the end of the clip, as if the image of Mary was being projected from that source. 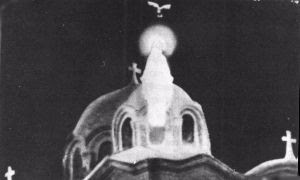 Coming in on the heels of other recent weirdness in the world, this BVM apparition doesn't seem to be a paranormal event, but part of this staging on a global level. Signs in the skies: UFOs for the saucer heads (Kremlin, etc.) blue spirals in Norway for the skeptics and rational, the BVM for the religious. And to keep us on our toes, failed Nigerian bombers and attacks on Italian authorities; the Pope, again performed for the religious, the Prime Minister for the rest of us.

Control, fear and wonder all at once. All are distractions, seemingly without connection to each other. Year end strangeness; it appears to be a bit much.

Red Hooded Woman Synchronicity
After I had posted these entries, I watched the movie Inkheart after dinner.  I had a jolting moment of synchronicity when, during the opening scene, where the character is reading to his daughter, a red cape and hood float down from the sky and fly about, landing outside their window.

Reposted on my blog  Octopus Confessional 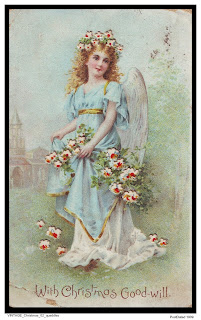 One of the coolest, smartest and excellent of female writers in the UFO/Fortean field, Skylaire Alfregen, is interviewed here.


Visit The Orange Orb
http://orangeorb.blogspot.com
Posted by Regan Lee at 11:45 AM No comments:

Skylaire Alfvegren, writer, Fortean and the creatress of L.O.W.F.I. (League of Western Fortean Intermediatists gets exposure in What Should L.A. Say to the Space Aliens?, by Jeremy Rosenberg for Think Tank L.A. (Lesley Gunter and myself are state reps for New Mexico and Oregon, respectively, for L.O.W.F.I.) Other contributors include Adam Gorightly and Andrew Colvin, among others.


Visit The Orange Orb
http://orangeorb.blogspot.com
Posted by Regan Lee at 1:05 PM No comments:

The previous post about One Step Beyond's Sacred Mushroom journeys inspired me to have fun looking for more; I found this trippy clip from a BBC program on reindeer and fungi:


Visit The Orange Orb
http://orangeorb.blogspot.com
Posted by Regan Lee at 10:02 PM No comments:

1961 One Step Beyond on The Sacred Mushroom

A clip from a 1961 episode of One Step Beyond on sacred mushrooms and ESP. Dr. Andrija Puharich, author of the book The Sacred Mushroom, appears, as well as others involved in related research at the time.

Edgar Rice Burroughs Princess of Mars is soon to be released as a movie. Reading Wikipedia's entry on the novel, considered to be "a classic example of 20th century pulp fiction" inspired me to read the book. The movie I'm not so sure about for a variety of reasons, including what comic book author and writer Christopher Mills of Atomic Meltdown has to say about the film. Sci-fi pulp is a genre I appreciate and wish I had time to get into, but I don't know much about it. I am a fan of vintage cover art; pulp fiction, albums, that kind of thing, and found some nice vintage images of Princess of Mars, as well as the others in that series. 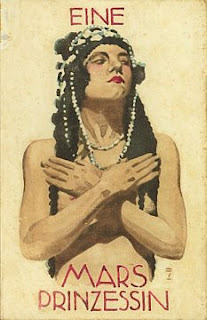 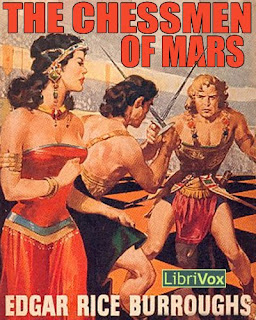 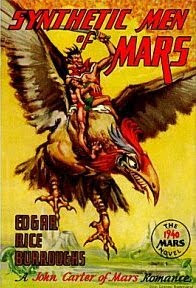 If you're interested, visit Atomic Meltdown for all kinds of neat-o stuff.

Visit The Orange Orb
http://orangeorb.blogspot.com
Posted by Regan Lee at 7:58 PM No comments:

Mechanical Voices From the Fringe

Reports of electronic, mechanical sounding voices from entities are sometimes reported as part of a UFO or some other unexplained event. Ghosts, aliens, UFOs, general high strangeness... buzzing, whirring, chimes, bells, clanging, metallic-electronic-mechanical type voices seem to emanate but, from where, and why do they sound so weirdly odd? This electronic weirdness has also been reported in some Mothman accounts.

The blog Strange Planet has a very interesting post about this strange sounding "voice," which inspired me to think on this and write about it at my blog Mothman Flutterings.