The Subversive and UFOs 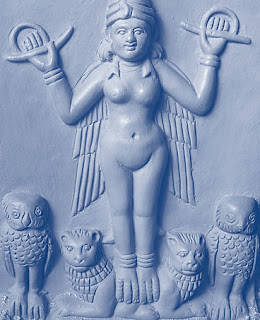 Some consider UFOs and aliens (or what we usually call aliens) as Satanic. Bound firmly within a fundamental Christian context, UFOs, aliens and all the phenomena surrounding the two are evil. UFO writer Stephen Yulish, who writes frequently for UFO Digest, believes this. Yulish writes extensively on UFOs and related matters, and he has a solid background involving UFO research. I’m not disputing Yulish’s knowledge of UFOlogy; it’s that our interpretations on things UFOlogical are so different. (See
Yulish on “Demonic Trickster”)

Lilith and UFOs. When I saw this title on UFO Review, I thought “Sounds interesting, wonder who wrote it? Maybe Richelle (Hawks) or Mary Alice Bennett. Hmm.. .” so I click and find it’s written by Stephen Yulish.

A few things in his article startled me, for example, this:

Years later, when I worked for the Jewish National Fund and the Jewish Federation of Phoenix, I read the Zohar, the bible of Jewish mysticism, and discussed Kabbalah with several Rabbis in town. I even channeled drawings from the yenne velt (the other world in Yiddish) and showed them to my Rabbi friends who loved them. Several were later published in the journal DreamWorks.

Sigh. I know, to each their own and it’s a free country and all that, but I always get nervous when non-Jews say things like this. Or, worse, when Jews who’ve turned to Christianity say things like that. However, that's pretty much a different ball of wax.

It’s here, though, that’s an excellent example of the huge divide between people like Yulish and myself. Lilith, like the Trickster, as archetypes are wont to do, are manifested within human behavior:

I also encountered several women who were Lilith archetypes and seduced me with their wicked ways.

(I wonder if Yulish is a fan of Henry Makow’s) Oy. Like the story of Adam and Eve, I’ve always wondered why it’s the female that gets the blame; not the weak male who so quickly and easily falls apart and gives in to temptation.

Not everyone shares Yulish’s views of Lilith. The Jewish publication Lilith magazine, for example, explains why they’ve named their magazine after the goddess:

According to myth and legend, Lilith was the first woman, created before Eve. She was Adam’s absolute equal.

In the Garden of Eden, long before the eating of the apple, the Holy One created the first human beings — a man named Adam, and a woman named Lilith. Lilith said, "We are equal because we are created from the same earth.— from the medieval text Alphabet of Ben Sira, 23a-b

I think a key word here is “subversive.” UFOs are subversive in their way as well. Their behavior is subversive; operating in our faces, so to speak, yet eluding all attempts to truly catch them either literally or figuratively.(And if a few have been captured, the powers that be withholding this information is being subversive.) Being involved in UFO research is subversive; its outside mainstream society. And any academic or scientist who looks into UFOs is being subversive, unless they’re out to prove the nonexistence of UFOs. 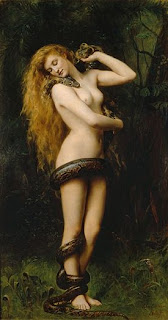 Another subversive topic is sex. Even in current times, with sex being highly objectified, ironically we’re still uptight about it, still argue over it, still remain ignorant of it. We’re still arguing over gay rights and gay marriage and sexuality is still mired in the political process. To come full out and openly about sex is subversive. UFO history is rife with sex; sex with aliens, humans kidnapped by aliens, strapped to tables, probed and prodded in personal places, disappearing pregnancies, hybrid babies, sexy aliens like the Nordics, bedroom visitations.

In the Talmud, Lilith becomes not only a spirit of darkness, but also a figure of uncontrolled sexuality. The Babylonian Talmud (Shabbat 151a) says: "It is forbidden for a man to sleep alone in a house, lest Lilith get hold of him." Lilith is said to fertilize herself with male sperm to give birth to other demons.
When the first man, Adam, saw that he was alone, God made for him a woman like himself, from the earth. God called her name Lilith, and brought her to Adam. They immediately began to quarrel. Adam said: "You lie beneath me." And Lilith said: "You lie beneath me! We are both equal, for both of us are from the earth." And they would not listen to one another. The Alphabet of Ben Sira

Lilith here is a metaphor for Jewish freedom as well as sexual freedom and independence for women, according to the Rabbi. In the 12th century, when the Zohar was written, Lilith was presented as a demon. Today, for many Jewish women, Lilith is not a demonic creature but a positive symbol. The archetype of Lilith isn’t bound in superstitious and fearful dogmatism, yet there are those who still cling to that model. The same can be said of some in their approach to UFOs; they stick to a firm nuts and bolts perspective, refusing to entertain anything outside of that idea. Still others choose either the negative (they’re all Satan) or the equally yet opposite end of the concept (they’re all Space Brothers.) We don’t know what they are or what they want, and very likely, like humans as well as archetypes, they vary in not only appearance but origin and motivation.

I think we need to recognize that we are active participants in the UFO phenomeana that help shape and define the process as we go along. We’re not just passive observers of weird things. We can choose to change in various ways aspects of the phenomena, if only in our personal perceptions of the thing. This isn’t to say “it” -- the Trickster, the manipulators, the UFOs, the aliens/entities, the players - aren’t in on it as well. History shows us they’re a lot better at it than we seem to be.

But we can be purposely subversive as well, just by deciding to look at the esoteric in different ways. Challenge it, question it, turn it around, turn it upside down. You can’t do that if you’re stuck in a rigid system.
Posted by Regan Lee at 7:33 AM

I write about this exactly in an upcoming issue of UFO Magazine... January I think...

I sure hope this is an example of great minds thinking alike! [g].

I'm glad you wrote about this article--I too was intrigued by the title. Alas, after short while, I stopped reading. I find the whole christian judgement tone (in anything) to be so unpalatable and uninteresting. I will definitely go back and finish it now. It's funny you thought it could have been mine from the subject, I have always thought the whole Lilith/owl & owl/UFO abduction motif was interesting. Maybe I will write a Lilith & UFOs article after all.

Equating a subversive psychological phenomenon with that of ufo's or Lillith, is to mistake creative provocation toward unity with that of self deception that one either projected upon others or is a rationale for bad manners, as if by an illusionary sleight of hand remove oneself from this reciprocal relationship and make claims of moral superiority. Nonsense. Interesting post.

If you believe in a "Trickster" then their is no need for any more research. Sure it is interesting to report but... Think about it.. an intelligence that can appear anywhere as anything and reach into your mind anytime it wants. How would you ever be able to discover what it is..It could considerably even "trick" you to think you have discovered what is.
But ETs using mythology to hide it's technology ...well that is something you could discover, that is, if you were not fooled.
The idea that a higher intelligence would use psychology we haven't even thought of to confuse and manipulate us is not only logical - but seems has been happening for as long as Ets have been here the natives new at least some of them were from the sky.
For me there are phenomenon on this earth that are not explained. If so, these realities are present in all of the universe. The Ets would know about them, also they may use them. The "Trickster" is an easy way out for people who wish the universe was simple but is instead filled matter, laws, people and ETS.

wow. The trickster mythos is far from a 'way out', easy or otherwise. It seems to me to be a description of phenomena and personalities than a dismissive end in itself. Saying something has a Trickster dynamic doesn't automatically drop it into the bin of the unreal. I recently wrote a trickster oriented article, and referred to Michael Jackson as the Grand Poobah of Modern Day Tricksters. Does that mean I think he doesn't exist separately from that? Likewise with the Trickster/UFO scenario. It's just one way to describe and glean meaning.