Tony Blair caught in a lie 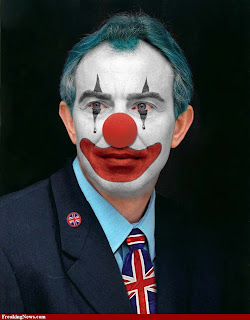 http://formerwhitehat.wordpress.com/2012/05/30/the-lies-of-war-criminal-reptoid-tony-blair/
Posted by Anya at 8:38 AM No comments:

And her name was Lizzie, sharing the first name of another infamous killer, Lizzie Borden. 'Jackie' the Ripper: Was the Infamous Serial Killer a Woman? There's still the royal connection; this Lizzie the Ripper was married to Sir John Williams, a physician.


John Morris, a retired lawyer living in Ireland, has implicated Lizzie Williams, the wife of the physician Sir John Williams, who was himself labeled a Ripper suspect in a 2005 book. Morris claims Lizzie killed the prostitutes out of anger over being infertile. Despair over her condition is also what drove her to remove the wombs of three of her victims.

Tantalizing as this new theory may be, other Ripperologists have decried the notion.

In his book, "Jack The Ripper: The Hand Of A Woman" (Seren, 2012), Morris cites as evidence the fact that none of the five murdered prostitutes was sexually assaulted, and that the personal items of one, Annie Chapman, were laid out at her feet "in a feminine manner." Moreover, three small buttons from a woman's boot were found in blood near the body of another victim, and remnants of women's clothing, including a cape, skirt and hat, were found in the fireplace ashes of a third victim, Mary Kelly. These items did not belong to the victims.

Found this new blog by "UFO Chick", thanks to Mike Clelland at hidden experience:UFO Chick.
Posted by Regan Lee at 3:51 PM No comments:


Yesterday's post by fellow Energy Worker and holistic blogger Pip Miller really got me thinking. She describes her struggles and not knowing how to make ends meet although she so clearly is on the path of her calling. Her post, 'I'm Lost, Are You?' got an enormous response, simply because most of us can relate but not many of us have the courage to talk about it. It goes against the grain of 'positive New Age thinking.'

Calling a spade a spade isn't being negative or denying oneself prosperity though - it's an honest search for answers and trying to make sense out of what is happening. There are real life situations that completely preclude a spiritual bypass. One such scenario is not being able to pay the bills in spite of having worked 50-60 hour weeks in order to make your business take off.