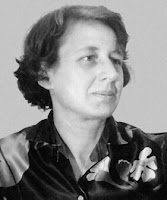 I am so excited to have finally found a photo of Vivian Godfrey. She may be more familiar as Melita Denning, her pen name. Along with her husband Leon Barcynski (aka Osborne Phillips) they authored several esoteric philosophy books, and a series of books for the popular publisher Llewellyn. The couple were also grandmasters of the mystery school Aurum Solis, as was their friend Carl Weschchke (Mr. Carl Llewellyn of publishing fame himself.)
I read the Denning and Phillips book The Llewellyn Practical Guide to Creative Visualization several years ago, and it fairly became a life altering experience. The entire time I was reading it, I felt this strange affinity with Melita Denning. I found out later that she died in 1997. In an 'in memorandum' posting at the Ogdoadic Notes website, a letter of the news of her death from her husband, he writes:
...In death she looked utterly peaceful; very beautiful, very dignified. It was remarked that every item of clothing and bedding that had been in contact with her body had a quality of sweetness and freshness. In the room in which she died, an elusive perfume, something like frankincense, lingered for almost twenty-four hours after her passing.
I completely believe that...there is just something about her. She seems to have had an amazing life, travelling extensively alone with the purpose of gaining occult knowledge, studying Jungian analysis, etc. I highly recommend the Creative Visualization book I mentioned, although the older version is better. The newer one seems to have been edited for a more contemporary tone, and it loses a necessary voice. A note about the title and subject--the book and information is occult in nature, and isn't generic and easy like books with similar title. It's not the Secret--it's specific techniques and psychological and cosmic insight that makes the Secret work.
Posted by richelle at 10:28 PM

I like what you said about visualization:
"A note about the title and subject--the book and information is occult in nature, and isn't generic and easy like books with similar title. It's not the Secret--it's specific techniques and psychological and cosmic insight that makes the Secret work."
My own experience supports that. Something anyone who's been doing this knows.

Yes--in watching The Secret, they kept referring to 'the ancients' who used it, and occult knowledge...but where were the techniques and specifics? I suppose tangible, tried and true occult techniques might not be so appealing to the masses, because they might not fit into the angels and love and light generic safe mystic sensibilities.

Hmm this is interesting. I first bought that book when I was 16 (The Llewellyn Practical Guide to Creative Visualization). I actually bought the book and the tape, i believe I only have the audio tape left. I'm 37 btw so it gives a time reference of how LOOONG ago this was. Sad to read she's passed.