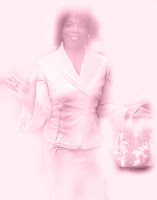 Oprah Winfrey may at first seem an unlikely subject in an esoteric framework. But, her enormous popularity, which cannot be extracted from 'spiritual' subjects, warrants a second look at the dynamics at play in her fandom and power.
What gives Oprah her magic? Can she be reduced down to an unlikely Hero--an ultimate rags-to-riches icon encapsulating the 0pressed? Black, female, molested, poor? Oprah seems unlikely, tragic. It is said even her name is 'wrong'--that her parents meaning to spell the 'real' or 'valid' name Orpha, misspelled it. That very well may be a legend, but it's almost more interesting as such. Oprah is all about identity and transformation. Her body is practically a canvas for change, and there's the anagram and backward Oprah of Harpo Productions. While this all seems to fit, it's pretty superficial and doesn't really seem to explain her phenomena.
It's hard to dismiss her affiliations with Marianne Williamson, The Secret, Neale Donald Walsh, and the like. It's all so palatable. There's hints of Christianity, hints of the occult. It's obviously attractive to the masses, as are many New Age ideas, but it's still about Oprah, not necessarily the products, books, or authors.
It's fairly routine to say Oprah has aquired some sagelike, or even Godlike status. But why--why? And how?
There's a fabulous book that explores Oprah's phenomena, "Oprah Winfrey and the Glamour of Misery" by Eva Illouz. From a review:
[Illouz] examines the Winfrey talk show in terms of what the author calls "the culture of pain and suffering." The "glamour of misery" of which the Oprah Winfrey show is said to partake is part of a larger cultural phenomenon by which victimization and the power to transcend suffering provide the basis for Winfrey's enormous popularity. The tales of woe told by the guests confer upon them the right to be recognized as individuals and endow moral power on the beleaguered storytellers. Illouz's point is that we live in a culture fascinated with the pain of others; the victimization du jour of Winfrey's show is popular because it assumes that there is virtue in suffering that leads to holistic healing.
Suffering and the virtue of overcoming is a trope of western culture rooted in Christian iconography, but it is also, according to Illouz, a particularly American idiom. The individual triumph over adversity supports the American idea that suffering builds character.
I recommend the book for anyone bewildered by Oprah and her attending fame and power. A warning, the book is academic and not light reading.
Posted by richelle at 6:32 PM

I have been irritated by Oprah for a long while now. One of the first posts I ever did at Lesley Land was about Oprah worship - http://lesleyland.blogspot.com/2006/01/oprahus-dei.html

I suppose that it isn't that strange in a society of celeb worship. The whole concept makes me ill.

I can't stand it either, and I usually preface all conversations and Oprah commentary with: I have never seen an entire episode of the show...
The book helped me to understand the dynamics behind it all. Although, I am almost equally horrified at the celebrity of victimhood.

About.com is even seeking a Guide to cover Oprah exclusively:
http://beaguide.about.com/topics.htm

That is scary. But, you can't argue it is certainly an entire subject.