She Has To Go! She Reads Tarot!

Toronto Beauty Queen rejected because she reads Tarot and practices Reiki. Yes, it's true. In this day and age. She's demonic and Satanic, don' you know, and women taping their boobs and getting their lips pumped full of chemicals and getting bikini waxes is All American, by gum! Sorry, starting to rant. Anyway, read about the hypocritical (after all, men shave their faces and eat bacon and wear mixed fabrics, all taboo in the Bible) topic on Phantoms and Monsters.
Posted by Regan Lee at 5:07 PM 2 comments:

Richelle and I will be guests on Adamn Gorightly's podcast Untamed Dimensions tomorrow night, Tuesday. 6 pm PST.
Posted by Regan Lee at 11:29 AM 1 comment:

Lesley has a really interesting piece up on her Grey Matters column for Binnall of America:

Lesley had a poll up recently on her blog Debris Field about UFOs; the choices were: do you think UFOs are nuts and bolts, or something more esoteric that will never be fully understood by science?

The article looks at UFOs in a different way than the usual, which is always refreshing. And I think there’s a lot of truth in what Lesley suggests.
Posted by Regan Lee at 11:15 AM No comments:

It's a little late but a HUGE BIG FAT ALIEN ESOTERIC HAPPY BIRTHDAY TO TIM BINNALL!!!!!

Hope you a great birthday Tim!
Posted by Regan Lee at 9:52 AM No comments:

Lisa Shiel, of the Backyard Phenomena blog, wants your suggestions. What would you like to see on a paranormol blog? Visit her blog and let her know!
Posted by Regan Lee at 9:49 AM No comments:

Beyond the Sky and Beneath the Sea 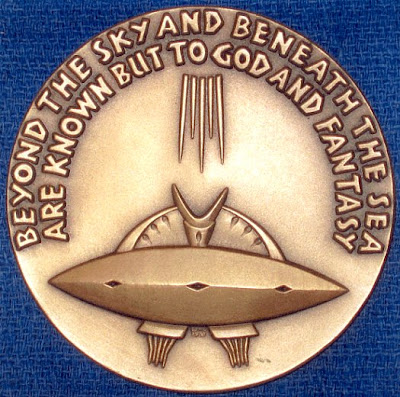 I love this!I want this! I found it on UFO Pop. I collect mermaid things, what could be better than finding a mermaid and a UFO thing in the same thing?! I believe this is from the 1950s, but not sure what year.
Posted by Regan Lee at 11:23 PM No comments:

In case you missed reading about this on other blogs and UFO news feeds, here it is again: UFO writer Georgina Bruni, author of You Can’t Tell the People -- about Rendlesham -- has passed. Nick Redfern on UFO Mystic has a nice entry about her; he knew her and has written about his friendship with her.
Posted by Regan Lee at 10:39 PM No comments:

Cliff Pickover, of Reality Carnival, also has Women in Wikipedia. Everything from Pope Joan and beyond. . . and mundane... and everything else.
Posted by Regan Lee at 9:49 PM No comments:

One of them anyway, I have, what, seven? That's not counting My Space or Paranormal Meet. But I would like to push my Mating Hedgehogs blog. Just because. You'll never know what might be up over there; vintage ads, film stuff, parapolitics, animals, Dr. Evils, . . .


Stop by! They're lonely over there.
Posted by Regan Lee at 5:43 PM No comments:

You have to read this. You just do. My Men in Black Visit Last Night, Part 1, by Richelle.
Posted by Regan Lee at 9:31 PM 1 comment: 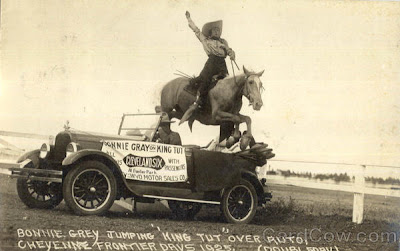 Just thought I'd share a great postcard image I came across...the caption reads "Bonnie Grey jumping 'King Tut' over auto, Cheyenne Frontier Days, 1925." This is funny...look at the man behind the wheel, leaning as far forward as possible while trying to retain a casual cool posture...
Posted by richelle at 8:58 AM No comments:

UFO Digest: "Are You Qualified?"

My rant on skeptibunker James McGaha on UFO Digest: "Are You Qualified?" (Ignore the text about Dana Howard, it looks like when they put the article up they inadvertantly added some text from my previous article on Contactee Dana Howard.)
Posted by Regan Lee at 11:35 AM 3 comments:

I was on Greg Biship's Radio Misterioso last night. It was great fun, but I was tired during the second half -- it was live -- so I have no idea what I was saying, lol. The important thing is Greg said he enjoyed it and said he'd like to have me back sometime, so it couldn't have been too horrible.

One thing I liked was Greg's style; more of a conversation than a strict and structured "interview" interview.

I haven't figured out yet how to get a link to the file; it's possible it's just not avaiable yet. As soon as it is, I'll post it here.

This Thursday Richelle and I will be on Adam Gorightly's Untamed Dimensions podcast.
Posted by Regan Lee at 10:07 AM 2 comments:

Richelle has a new item up on Binnall of America: her column Medusa’s Ladder, with her article Take Your Protein Pills and Put Your Helmet on: The Flying Humanoids and Liminality.

In the piece, Richelle says that she finds the flying humanoids “creepy.”

I find something ineffably creepy about the recent flying humanoid videos. The much circulated youtube Mexican flying witch video was the stuff of my nightmares. Hoax or “real,” whoever or whatever is responsible for that image of the seated, dark figure, complete with pointy hat and cape, cruising smoothly through the air as if in a living fairy tale—really knows how to play on an archetypal element.

I agree, I don’t know why, haven’t analyzed it, but they creep me out as well, especially that witch one from Mexico. As Richelle noted, hoax or not, doesn’t matter. Still creepy.
Posted by Regan Lee at 6:40 PM No comments:

Read about a children's book in the flying saucer genre on Vintage UFO. I love the artwork!
Posted by Regan Lee at 1:56 PM No comments:

I've written a couple articles about occult-themed fiction recommendations; although there is so much out there, much of it is pulp, (I do appreciate pulp, but the right kind...) flimsy, too 'slasher', or just plain bad. Obviously, greatly developed characters go hand-in-hand with great fiction, and I have found myself gushing over certain female characters in the reviews.

So, I thought I'd recommend a few books based on some of these characters.

Republic of Love by the unfortunately late Carol Shields: While this smart love-story novel itself is not based around an esoteric theme, the main character, Fay McLeod, is an academic folklorist who works in a folklore center, and is researching a project on mermaids. It's a metaphor within the story of course, musing on the mysteries, elusiveness, and depths of love, but Shields treats the subject thoughtfully and seriously, and it is not fodder for 'wackiness.'

This was the first of Shield's books I read, and it was one of those books I could barely bring myself to read the last page because I didn't want to lose its world. I recently learned it was made into a movie a couple years ago, and watched it on Netflix instant viewing. I assumed it would be awful--in the wrong hands, it easily could have been translated into a sentimental made for TV type thing. But I loved it. There are some fantasy-device type scenes with the mermaids that on their own make it worth viewing. Kind of a styly, silent film thing, cabinet photo vignette, vintage nude photography deal. Loved it.

Book of Shadows, by James Reese: I'm just going to quote from an article I wrote, because I don't think I can put it better now: [In Book of Shadows, Reese] has included an impressive supporting character, the seductive and profoundly wounded Madeleine de la Mettrie, who is arguably the most compellingly tragic gothic-genre character in recent memory. Madeleine breathes life and strength of will into the clichéd business of being undead, and her storyline is reason enough to grab Reese's book. It is also satisfyingly epic and memorable; it will certainly appeal to Anne Rice fans on the lookout for good, pulpy modern gothic.

In addition to the supporting character of Madeleine, there are other great female characters, including Herculine, the hermaphroditic main character, and her mysterious mentor, Sebastiana. Good news for anyone who loves this book--there are two more in the series now.

Strangely, this book did not generally get good reviews. I don't understand. It's epic, well written, with amazingly developed characters. I suppose the subject matter could be considered indulgent (witches, etc.) by mainstream reviewers.

Both books are available at amazon for under a buck. More to come...
Posted by richelle at 9:24 PM No comments:

Lesley of the Debris Field, and Beyond the Dial, has started a new blog: Land of Enchantment. It's a regional blog about New Mexico, dealing with the esoteric. Great idea!
Posted by Regan Lee at 9:02 PM No comments:

We TV on Alien Abductions

My next Trickster's Realm column for Binnall of America wil be up sometime tomorrow. It's on the We TV series Alien Abductions:True Confessions.
Posted by Regan Lee at 3:05 PM No comments: 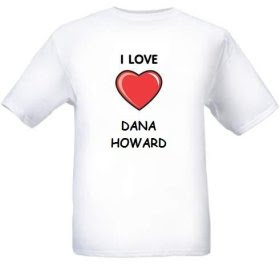 This is a real item (I did not create it, etc.) available via amazon.com. I was searching to see if any of her books are available, and...what the?
Posted by richelle at 9:35 AM 1 comment:

The cable channel We TV has a program with the somewhat cheesy title Alien Abductions: True Confessions. I've seen three of these so far (I think that's all that's aired so far) and they're pretty good, in the sense they don't make fun of these women. We is woman centered, so the focus is on female abductees. I noticed something; that with all the shows so far, they end on a positive note, no matter how terrifying the experiences are. In fact, there seems to be a formula: women has life long or pattern of unexplained missing time, UFO sightings, feelings of anxiety, 'dreams" of aliens, can't wake up S.O. while hearing/observing UFO or light, etc.

Then goes through a long time, decades sometimes, of denial, repression, convincing the self it's all a dream. Then can't take it anymore, lol, and gets regressed, where of course, it's found she has been abducted all along.

While friends and family members have been lost due to the woman's abduction experiences (they can't handle it, etc) the woman ends up feeling empowered and there's some kind of peace, now that the truth is out. Some women go on to help others in this area; getting involved in UFO research, etc. (sound familiar?
Posted by Regan Lee at 12:02 PM 1 comment:

On the Right Track: Toward Solving the Mystery of the First Known UFO Photograph

Very interesting article by Richelle for UFO Digest! Is this the oldest UFO photo, or . . .?

http://www.ufodigest.com/news/0108/righttrack.html
Posted by Regan Lee at 7:12 PM No comments:

New Writer at Binnall of America

I don't know if Richelle plans to mention this here or not, and I hope I'm not stepping on toes here, but I want to let everyone know about the newest addition at Tim Binnall's Binnall of America.

Richelle, one of our bloggers here at Women Of Esoterica, has just joined the group of writers over there, (which includes Lesely, who writes the Grey Matters column, and myself, Trickster's Realm) with her column Medusa's Ladder.

UFO over my hometown

Over at this link in a British newspaper today there is a story, with picture, of a UFO over my hometown.

Hmm, I don’t want to be a spoilsport, but it looks more like a lenticular cloud to me – although I don’t know if you have to have certain weather conditions for those types of clouds to form.

Do I come out and finally acknowledge I've been abducted? Do I sound like Minnie Mouse or Ertha Kitt? Find out on Culture of Contact!
Posted by Regan Lee at 6:23 PM No comments: