It's stories like these that makes us keep going in the Fortean realm:


Elderly Woman Reveals Family Secret On Video: UFO Lands in Corn Field and 'Little People' Exit The Craft: One sister started talking about a story her father, my great, great grandpa made her promise to never talk about, but since she was over 90 years old she didn't think it mattered anymore. She was very flustered still just talking about it. The best we can tell, this event took place in the Logansport, Indiana, area in approximately the 1890s or so, maybe earlier, maybe later.

... On this particular day, she could not find her father or grandfather. She then heard them yelling at her to get inside the woods nearby and hide. She complied and that's where they began telling her that they had been watching some sort of flying machine that didn't make any sort of noise flying around the field. They supposedly watched little people get out of the craft and take pieces of corn and soil, and then they flew away. The uncle and father had been hiding in the woods for some time afraid to leave.

Video and more at UFO Chronicles.
Posted by Regan Lee at 8:13 PM No comments:

Numerology on C2C: 2013 in Numerology

Tonight on Coast to Coast, Glynis McCants on numerology:2013 in Numerology/ Energy - Shows - Coast to Coast AM
Posted by Regan Lee at 8:08 PM No comments:

Paranormal Creatures - Shows - Coast to Coast AM
Posted by Regan Lee at 8:03 PM No comments:

It's time to howl at the Full Wolf Moon


Here is a listing of all of the full moon names, as well as the dates and times for 2013. Unless otherwise noted, all times are for the Eastern time zone:
Jan. 26, 11:38 p.m. ET —Full Wolf Moon: Amid the zero cold and deep snows of midwinter, the wolf packs howled hungrily outside Indian villages. It was also known as the Old Moon or the Moon after Yule. In some tribes this was the Full Snow Moon; most applied that name to the next moon. [Full Moon: Why Does It Happen? (Video)]

Feb. 25, 3:26 p.m. ET —Full Snow Moon: Usually the heaviest snows fall in this month. Hunting becomes very difficult, and hence, to some tribes this was the Full Hunger Moon.

Women Of Esoterica: Are Archons Greys? by Usko Ahonen Md.

The following quote resonated with me. However, the article is primarily about the Gnostics and the Archons.

To the horrified astonishment of Dr. Castaneda, the elder sorcerer Don Juan explained how the human mind has been infiltrated by an alien intelligence: “We have a predator that came from the depths of the cosmos and took over the rule of our lives. Human beings are its prisoners. The predator is our lord and master. It has rendered us docile and helpless. If we want to protest, it suppresses our protest. If we want to act independently, it demands that we don’t do so.”

The rest at Women of Esoteria.

Very much a must read:Are Archons Greys? by Usko Ahonen Md.

The following quote resonated with me. However, the article is primarily about the Gnostics and the Archons.

To the horrified astonishment of Dr. Castaneda, the elder sorcerer Don Juan explained how the human mind has been infiltrated by an alien intelligence: “We have a predator that came from the depths of the cosmos and took over the rule of our lives. Human beings are its prisoners. The predator is our lord and master. It has rendered us docile and helpless. If we want to protest, it suppresses our protest. If we want to act independently, it demands that we don’t do so.”

The late Harvard professor John Mack wrote that “a number of shamans with whom I have spoken, from native cultures of North and South America, Africa, and Australia, know of, or have had encounters with, beings that have properties much like the grey aliens that visit abductees in the United States and other Western societies. Each culture has its own name for them. According to these shamans, beings of this sort have been around for thousands of years and seem to have a great interest in the face of Earth, functioning as its scavengers or protectors depending on the particular shaman's experience or point of view.”

The above reminded me of two experiences I had several years ago. One, involving a green reptilian type entity (though not the typical alien-reptilian often portrayed as "the Reptilians") and the other, a cape used by a Central American shaman.
Posted by Regan Lee at 3:57 PM No comments:


Reading Whitley Strieber's fictional work, Beyond 2012, the Omega Point. Just read the part where a character is writing in his journal about events and "time movement." He mentions the Skinwalker ranch in Utah, specifically, the wolf like creature that was seen there:

"...I recognized the animal to be a dire wolf. .. the dire world was rendered extinct by... the last Ice Age. And yet, here it was on this ranch. I think that this animal had moved through time...there was something about the place... in its own time, this animal was experiencing incredible fear. Its world was collapsing... most of Utah was flooded along with the rest of the United States by rapid glacial melt. .. given pressure extreme enough and the right conditions, actual physical movement through time must be possible." (Strieber pp83-84)


Last night, listening to Coast to Coast, a female caller recommend reading Vallee, and said that the events at the Skinwalker ranch (among other unexplained encounters) was due to our imagination. Not in the sense we are making things up, but that there is another dimension, or place, where all these things exist. Opening ourselves up via imagination causes us to see these things. (That's what I got from her anyway.)

Two different takes; Strieber, via his character, suggests that time lines exist concurrently and, due to events in one time line, another time can abruptly appear. The other; that our minds somehow allow us to see these other realities, for whatever reasons, being open to the possibility among them. 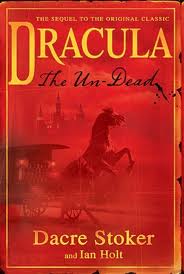 The other day I found this book, brand new, at the Dollar Tree: Dracula, the Undead, by Dacre Stoker. Dacre Stoker is the great grand-nephew of Bram Stoker, author of the classic Dracula. I haven't read the book yet -- reading my other dollar store book find right now. Here's a blurb from Amazon on Dracula the Undead:

"The official sequel to Bram Stoker's classic novel Dracula, written by his direct descendant and endorsed by the Stoker family. The story begins in 1912, twenty-five years after the events described in the original novel. Dr. Jack Seward, now a disgraced morphine addict, hunts vampires across Europe with the help of a mysterious benefactor." 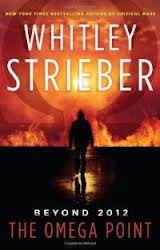 I'm looking forward to reading this, I love good Vampire stories (not the slow motion teen angst of Twilight stuff) and I also love the time period of the late 1800s into the early 1900s. So. My other book find, for a buck, at the Dollar store: Whitley Strieber's The Omega Point: Beyond 2012. I wasn't going to get it at first, not sure why, haven't read Strieber in years. Though I do keep up with him and respect him. But something made me go back and pick up the book and I'm glad I did. I haven't finished it, but so far, it has really kept my attention! I'll be posting more on the book at Animal Forteana and UFO Mary.
Posted by Regan Lee at 8:41 PM No comments:

The MSM and the world culture seems to have forgotten about the members of Pussy Riot. But they are still here, and this is the current state of things for one member:

: MOSCOW (Reuters) - One of two jailed Pussy Riot members said she received death threats and complained of abuse at a prison colony where she is serving a two-year sentence for a punk protest against President Vladimir Putin in Moscow's main cathedral.

But Maria Alyokhina and fellow group member Nadezhda Tolokonnikova said they did not regret the protest, despite describing harsh prison conditions in interviews published on Wednesday by the opposition-leaning Novaya Gazeta newspaper.

Alyokhina, 24, who lost an appeal this month to have her sentence deferred to care for her five-year-old son, said she was transferred to solitary confinement in November after being threatened by inmates she suspects of acting on the orders of prison officials.

"(They said) if you stay in this unit - that's the end of you... Human rights are grossly violated here," said Alyokhina, who is being held at a penal colony in the Urals Mountains region of Perm.

The members of Pussy Riot were jailed because they did a street performance in front of a church. Specifically, they were found guilty of "hooliganism motivated by religious hatred." Cries of "blasphemy!" followed and so, in an ironic act, those offended Christians behaved decidedly un-Christian like -- and more Taliban-like - participated in the sentencing of Pussy Riot members.

Help wanted: 'Adventurous' woman to give birth to ... a Neanderthal baby? - Cosmic Log

Help wanted: 'Adventurous' woman to give birth to ... a Neanderthal baby? - Cosmic Log: "Pioneering Harvard geneticist George Church suggests that the day is coming when we'll want to reverse-engineer the Neanderthal genome and pass the now-extinct creatures' advantages to our own progeny. All that's needed would be an "extremely adventurous female human" to serve as a surrogate mother."

The Gothic Closet - Decor from the Soul of the Night

Some very cool items for your magick and fashion needs atThe Gothic Closet - Decor from the Soul of the Night. Including steampunk accesories for men.
Posted by Regan Lee at 2:51 PM No comments:

Passing along some groovy witchy blogs I found:Mystic Cauldron Blog
Posted by Regan Lee at 2:43 PM No comments:

Sean Casteel: An Occult View of UFOs and the Paranormal

Liked this article by Sean Casteel very much --  on Maria D'Andrea, at UFO Digest:

An Occult View of UFOs and the Paranormal: As with many people who encounter the UFO phenomenon, Maria D’ Andrea’s experiences began in childhood. Maria is a native of Hungary, and in 1956, she fled along with her family from the coming tyranny of the Communist revolution raging all around her there.

“Basically,” Maria said, “I was hearing about UFOs at that point because, when we were escaping, every now and then people would look up and look for them. We were used to hearing about them.”

It was also around the young age of eleven or twelve that Maria had her first personal UFO experience.

“I was going out-of-body,” she explained. “It wasn’t a physical experience. It was through astral travel.

My Grumpy Cat Illo On Another Website : WitchesBrewPress's Blog

I just really like "Witchi poo's" art work. Here's her blog: My Grumpy Cat Illo On Another Website WitchesBrewPress's Blog

One of my favorite Fortean bloggers: Red Pill Junkie | Intrepid Blog Lots of neat items over there. I was going to choose one of my favorites, but realized they're all great items and it's hard to choose. But I think the most recent is my favorite (as if one has to choose) because of the subject matter: Chosen By the Providence: The Spiritualist Origins of the Mexican Revolution.
Posted by Regan Lee at 11:33 PM No comments:

Just a promo for Lesley's The Debris Field, full of links to interesting places. Updated nightly. Thanks Lesley for the anomalous junkie fuel!
Posted by Regan Lee at 11:28 PM No comments: