Psycho Bunny Deals With The Heat

Just sharing a link to a blog I like: Michele Witchipoo, cartoonist, artist, blogger and would be misanthrope. I can relate.
Psycho Bunny Deals With The Heat
Posted by Regan Lee at 12:43 PM No comments:

On the L.O.W.F.I. Site: "Hum a Few Bars for Me" by David Andrew: Beeping Sounds

Hum a Few Bars for Me by David Andrew.

At the L.O.W.F.I. site, this guest article by David Andrew on the buzzing and humming sounds often heard by some abductees. I don't consider myself an abductee, as I often point out, for two reasons. One, I have no idea what the abduction phenomena is about and two, I don't have any specific conscious memories of the classic abduction scenario, even though I have had a lot of very strange experiences. As Jeremy Vaeni said to me once I've gone through "Abduction 101." (Missing time, strange dreams, obsessions, synchronicities, life time of UFO sightings, aliens...) Yet, I have heard these strange buzzings, clickings, hummings and electronic type sounds in my head many times during OOBEs and related experiences.

Andrew cites research done in this area of sound and brain wave patterns and writes:


Some abductees have reported humming or buzzing sounds just before certain abduction experiences. This made me wonder if these sounds might actually have a purpose that could be related to the abductee’s brain wave function. Could extraterrestrials be utilizing sound to affect abductee’s brain waves and, what would be the purpose in doing so? It seems quite evident that sound waves can affect brain waves.

Andrew goes on to cite experiments done by the Department of Defense using sound to alter brain waves. While Andrew doesn't come out and say it -- and I don't know if this is his intent or not -- I wonder if he wasn't getting at MILABs. (Military Abductions.)

Either way, this pattern of hearing buzzing, beeping, humming sounds during sleep, OOBEs, abductions, etc. is something that is reported by some UFO witnesses, including myself.

These sounds are not heard by just abductees however. In some Bigfoot encounters and other high strangeness events witnesses report hearing these sounds. See Greg Taylor's Her Sweet Murmur, and my  Beeping article for UFO Digest.
Posted by Regan Lee at 11:58 PM No comments:

News From Elsewhere presented by The League of Western Fortean Intermediatists.

News From Elsewhere presented by The League of Western Fortean Intermediatists.

A page full of links to news and stories from Skylaire Alfvegren's amazing L.O.W.F.I. site. Have fun exploring!
Posted by Regan Lee at 11:34 PM No comments:

Going Back A Bit In Time – Revisiting The Early Days Of UFOlogy And The Contactee Movement | UFO Digest provides video proof of ufos, alien abduction and the paranormal.

At UFO Digest, Sean Casteel reviews Tim Beckley's reprint of two stories of two female contactees, Dana Howard and Gloria Lee. (I wrote the intro for the Gloria Lee book.) As Sean points out, there are UFO researchers who reject the contactee era as embarrassing nonsense, or, as he puts it, attack Tim Beckley for exploitation:

Though Tim Beckley believes his motivations should be seen as altruistic, to others they are controversial even appalling. There are still some purists in the field who believe that “contactee” is a dirty word. Yet all things considered, Beckley is doing the UFO community a huge service by reprinting hard to find books from the 1950s, books written by early UFO experiencers who were the first to claim contact with the aliens after the initial sighting by Kenneth Arnold in 1947 that started it all.

Going Back A Bit In Time – Revisiting The Early Days Of UFOlogy And The Contactee Movement | UFO Digest provides video proof of ufos, alien abduction and the paranormal.
Posted by Regan Lee at 10:49 AM No comments:

Our contributor Tina Sena's current column over at Binnall of America:How To Make The Perfect Paranormal TV Show
In An Imperfect Normal World. Tina discusses paranormal programming, and has a proposal:


Which is why I propose that Syfy, National Geographic and the History Channel (and others like BRAVO, etc.,.) seriously consider doing a paranormal show with a mostly, if not all, female cast. And I'm not talking about your average formulaic paranormal show. It has to be something that's never been done before: A show for women, with women and about women from different professional backgrounds, investigating the oldest, weirdest, most paranormally significant places on Earth.

I'm for that! One of my dreams is to start my own paranormal UFO network. Hmmm...

A few years ago, I think on the Lifetime channel, there was a show about female abductees. Had a cheesy title, something like "I was abducted by aliens!" but it wasn't bad, despite the shaky camera stuff.
Posted by Regan Lee at 8:14 PM No comments:

Women of Esoterica contributor Lesley Gunter's current column, Grey Matters, at Binnall of America, where she writes about the "Creepy Summer" in New Mexico:

grey matters: "Always as I see it coming in the Stephen King story The Mist comes to mind, as does the Smoke Monster from Lost. I almost expect some horrible Lovecraftian-type creature to come slithering out of it and start devouring everything in sight. Meanwhile, I think that somewhere beneath that could be a fleet of UFOs and nobody would ever know."

I followed a link on one of Nick Redfern's blogs: Jennae's Thoughts on the Paranormal...and More -- thought I'd share! It's very interesting. I always appreciate when a person puts themselves out there with their paranormal thoughts and experiences.

Her post "Beyond the Cutrian" which Nick linked to, discusses the idea of "monsters" coming from other dimensions. What's Jennae's conclusion? Read it and find out!
Posted by Regan Lee at 4:34 PM No comments:

The Life of a Paranormal Writer | Lisa A. Shiel

Bigfoot author and witness Lisa Shiel (Backyard Bigfoot,) on being a writer of paranormal topics: The Life of a Paranormal Writer | Lisa A. Shiel
Posted by Regan Lee at 2:53 PM No comments:

I was just thinking about Oates and the subject of reverse speech; how Oates used to be on C2C all the time, and the whole area of reverse speech. I think Oates and Art Bell, maybe it was another C2C host, had a falling out some time ago. I don't think Oates has been on C2C for some time. Anyway, have been thinking about this fascinating topic lately for some reason, and how, in my opinion, it's still ignored.In a bit of synchronicity, I find this link on Rense.com, linking to an interview with Oates and Rense about reversals regarding ET. (Years ago the two major competing AM stations in Eugene carried, respectively, C2C and Rense at the same time. The station carrying Rense dropped him; thankfully I still get my Fortean fix from KPNW in Eugene, which carries C2C, even though, unfortunately, they air the show beginning with the second hour, because we all know how important and wise Lars Larson is, which precedes C2C in our area.)

Some of you know what I think about Rense, but he's just the vehicle.  Still an interesting segment.
Posted by Regan Lee at 10:27 PM No comments:

A few comments from Lesley at the UFO Magazine blog on the Lance Moody/Philip Imbrogno episode: The Gold Standard ;-)
Posted by Regan Lee at 10:40 PM No comments:

Following a link on Anya Briggs blog, found this: Invoking Mother Spirit. Where there is post about Anya's recent interview with The Truther Girls, which you can listen to here.
Posted by Regan Lee at 9:31 AM No comments:

Are moments of synchronicity signals to us that "they" heard us and are responding? ("They" being whatever force, symbol, deity, entity, energy you care to put on it. )

A big issue for me is distraction. Putting a label on it, like AADD helps in one sense; it's not "just me" and I'm not a big stupid lazy flake. Others may think so, and I don't blame them, but for myself (and a bit ironically) that acknowledgement of my life long struggle with things has actully helped me to focus. Acknowledged, named, owned, I now move on. It's not an excuse; in fact, since I've been dealing with this in various ways I've become less distracted. I look at it, say "screw off, AADD," and fight the good fight.

I'm going on about this because my path has been one of distraction. (I suppose "all who wander aren't lost" is a good motto to keep things positive.) So the past couple of weeks I, once again, have been focusing on meditating and the work in psychic/intuitive areas, including the use of oracles. Each time I go back to this work, immediate results come in, from OOBEs to precognition...the gates have opened, and a rush of energy comes through. 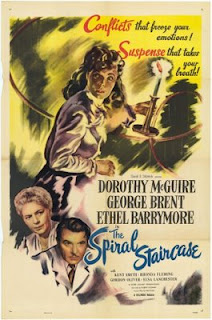 So lately since I've been meditating and working once again with stones, particularly amethyst, I've been experiencing synchronicity. Most are too trivial to mention. But here are two examples: yesterday as as I was working in the garden, I found myself thinking of the actress Dorothy McGuire. What movies was she in, whatever happened to her, etc. I wondered why my chattering mind was suddenly focusing on Dorothy McGuire but there it was. And after a hard day of working in the yard, I turn on the TV later that night to find that The Spiral Staircase, starring Dorothy McGuire, was just about to start on TMC.


This morning, as I'm sweeping the living room floor, I see a huge disgusting and scary insect crawling over a book. (I admit that it was "disgusting" because I was scared.)  I don't know what it was exactly, at first I thought it was a cricket. Then maybe a wasp of some kind. I'm still not sure; I wasn't about to get a close look. I don't like killing things and will often take creatures out of the house, and I'm not one of those yahoos that stomp on bugs just because you can. But I did this morning. That bug was huge, ugly and creepy. It actually frightened me.

Finished with sweeping, I settle in to read the morning paper, starting with the comics. (The horrors of the day can wait two minutes.) I turn to one of my favorite comics, Mutts, and see this:

On Snarly Skepticism: Dawkins Being a Dick

Snarly Skepticism . . . (and Unofficial JREF Watch): From The Daily Grail:Dawkins Being a Dick
Posted by Regan Lee at 8:11 PM No comments:

Women on Trial for "Murdering" Their Babies

There’s a trend across the US that has reached Mississippi. On June 8th, Rennie Gibbs’ murder trial was put off and will resume in August. She is charged with killing her unborn child. Not willfully, but murder nonetheless.

According to prosecutors, Ms. Gibbs was taking cocaine during her pregnancy. Even though the fetus’s premature delivery and death were not found to be caused directly by drug use. That bears repeating – the baby did not die from the cocaine. However, Ms. Gibbs use of cocaine during the pregnancy showed a “heartless disregard” for the consequences. And since the fetus died, murder charges are warranted.

Mishap or Murder?
Posted by Regan Lee at 1:54 PM No comments: