Blog-tag and hat tip to Lesley!

I have a new item up at my blog Mothman Flutterings, about a poem I wrote about twenty years ago or so, and parallels to Mothman.
Posted by Regan Lee at 8:46 PM No comments:

The Trickster Elves (on Machine Elf)

A WOE contributor, Lesley, has a blog called Machine Elf that is very nice. I really liked her latest post: The Trickster Elves.

I saw a YouTube video today titled, Ghosts, Spirits, and Demons. It’s a compilation of videos from various sources, some allegedly dating back to the 1970's, others I recognized as being fairly recently made. I can’t vouch for the authenticity of any of it. Some of it could have been faked fairly easily, but I have no grounds for saying that it was. Most of it appeared to be real footage of real unexplained events. It’s definitely worth a look – I’d love to hear about it if anyone has concrete information either supporting these videos, or establishing them as hoaxes.

The most interesting clip, to my mind, is the last one. It’s titled, Demon Child in the Mirror, so I was prepared for one of those joke endings where some horrifying scary face from some movie suddenly jumps out at you. Thankfully, that didn’t happen. (I hate those, not only because they’re fake – they always scare the *&# out of me, lol.) What this video did show, was a lovely little girl combing her hair in front of an old-fashioned three-way mirror. Due to the camera angle, we can see the little girl and two of the mirror panels, showing her reflection. She finishes combing, puts down her comb and turns around to face the camera; then she turns back to the mirror for a moment, then back to the camera again. The second time she turns back to the camera, ONE of the reflections doesn’t change...her face appears in the camera and also in the mirror behind her. The reflection in the other mirror panel shows the back of her head, as it should.

I watched this segment several times, pausing repeatedly to study the individual frames, and I haven’t been able to detect any tampering. Admittedly, I’m not an expert, and I know that a lot can be done these days with computer graphics; but the overall quality of this video is simply not that high. It’s good, but it really doesn’t look like it’s been “fixed” at all.

I was especially interested in this segment because of an experience I had several months ago. I walked into the bathroom one night to brush my teeth before bed, and as I turned to look into the mirror, I saw my own face reflected – in profile. Startled, I turned to look at another mirror that hung on the wall next to me – that reflection was normal, and when I turned back to the first one, my own shocked, white face stared back at me.

I am sure of what I saw, but I can’t understand how it could be possible. A hiccup in time? An error in The Matrix, like the black cat that appeared twice in the movie? I have no idea. I only know that I saw my own face in the mirror, from an angle that was impossible according to conventional physics. I saw it for several seconds, and I immediately told my husband about it. I was visibly shaken when we talked about it, and he remembered it right away when I showed him the little girl in the video today.

Has anyone else had an experience similar to this? I’d love to hear about it, if so. Obviously, there’s more to physics (and to life itself) than we currently understand. Please feel free to write to me at kdolan@rochester.rr.com.
Posted by Karyn at 2:47 PM 3 comments:

Here's the link to Richard Dolan's appearance on Fox yesterday morning. Thank you Karyn Dolan for sending the link. Karyn Dolan encourages people to let Fox know what they thought of Richard's segment; would viewers want to see more like this, what's their take on the whole thing, etc.

Kathairina Wilson has an item about her own UFO sightings on Januaury 8, the same night as the mass sightings in Stephenville, Texas on her Alien Jigsaw site. There's a lot more interesting reading on the site, and you can download her book "I Forget What I Was Supposed To Remember" for free.
Posted by Regan Lee at 2:21 PM 1 comment: 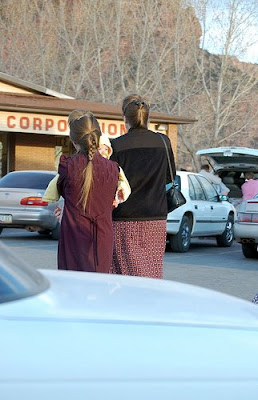 A friend of mine recently journeyed to the infamous polygamous outpost of Colorado City, Arizona--this is the land of Warren Jeffs (the currently-incarcerated former leader of the Fundamentalist-LDS church.) She took lots of pictures.
Coincidentally, several days after talking to my friend at length about her experiences in Colorado City, The Oprah Winfrey Show featured an escaped victim of this polygamous sect. They also ventured to Colorado City.
There are so many big obvious issues here, on both sides of the compound--freedom, misogyny, child abuse, etc. However, I can't help but be a little fixated on a seemingly smaller issue--the aesthetics involved. Oprah made a good albeit simplistic observation when she kept referring to the "1800s dresses" the women wear.
It's so much more than that, however. Specialized clothing for the flock goes along with religion. Mennonites, Amish, Muslim, etc. So picking on the FLDS for their lack of modernity or simplicity seems too easy.
I just wrote a bit about my observations in my column at BoA...read more here.
Women in Colorado City photo by bigbrownhouse used with permission.
Posted by richelle at 7:58 AM 2 comments:

Another lovely lady involved in esoterica. She has a fabulous website containing her articles on weird Nevada, Charles Fort and other esoteric related topic. I very much enjoyed her article on the bitter old man we know as James Randi.

To quote from her own site -

Skylaire Alfvegren has worked on cars for the Mexican mafia and roped cattle on the border of Area 51. Having witnessed her first UFO alongside Air Force personnel as a child, she began her writing career at seventeen with "File o' the Damned," a column of Fortean investigation for Fizz Magazine.

Tina Sena: Embracing the Esoteric From A Women's Perspective

Tina Sena has her recent column (Esotericana) up at Binnall of America: Embracing the Estoeric From a Women's Perspective. Go, Tina!

Tina also has her own blog, Yufology.

http://www.binnallofamerica.com/eso4.14.8.html
Posted by Regan Lee at 7:16 AM No comments:

2-Faced Baby is Hailed As an Indian Goddess

A baby with two faces was born in a northern Indian village, where she is doing well and is being worshipped as the reincarnation of a Hindu goddess, her father said Tuesday.

The baby, Lali, apparently has an extremely rare condition known as craniofacial duplication, where a single head has two faces. Except for her ears, all of Lali's facial features are duplicated - she has two noses, two pairs of lips and two pairs of eyes.

"My daughter is fine - like any other child," said Vinod Singh, 23, a poor farm worker.

The new blog is Mothman Flutterings. The inspiration came from my interest in Mothman (that I've had for years, ever since reading Keel's book), reading Andrew Colvin's Mothman Photographter's II, and some odd experiences of my own.

You can visit the blog here: Mothman Flutterings, or cut and paste link below:
http://orangeorb.net/blog/
Posted by Regan Lee at 5:11 PM No comments:

Lesley has a really nice looking new blog that promises to be interesting, and a bit different. It's called Machine-Elf. She has a post up there now about fairies that I really enjoyed.

Lesley and I are both web/blog junkies, and so of course I had to go and try the new website/blog site she wrote about on Debris Field. It's called Squarespace. I dunno, doesn't seem to be working for me so far, I can't get it nifty like Lesley's. I'm playing around with a Mothman theme, but we'll see.

Anyway, be sure to visit Machine-Elf!
Posted by Regan Lee at 9:47 PM 1 comment: 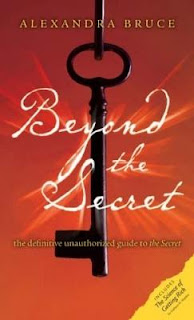 It is nearing the Retro UFO time (April 26-27) and so I thought here at WOE I should write a bit about my friend Alexandra (Chica) Bruce. She will be speaking at the event.

In all honesty I haven’t read any of Alexandra’s books yet. I knew about her through her various internet audio interviews and Paranoia Magazine. She does have books though -

Beyond The Secret: The Definitive Unauthorized Guide to The Secret

The Philadelphia Experiment Murder: Parallel Universes and the Physics of Insanity

Beyond the Bleep: The Definitive Unauthorized Guide to What the Bleep Do We Know!?

Celestial Secrets: The Hidden History of the Fatima Incident

I don’t know her very well, though we are facebook friends and have corresponded from time to time. I get a good feeling about her. I don’t mean that in a way related to her research, though there is that, but I mostly mean it in a more personal way. Alexandra seems to enjoy life and having fun, with so many stuffy esoteric researchers that is always a good thing. Besides that she is a SHE and God knows we could use more of those.

So even though according to Facebook she is a Long Island Iced Tea, I can forgive her for that. Alexandra, can you forgive yourself? Perhaps you were not entirely honest with the all knowing quiz?

If you aren’t on Facebook you probably didn’t get that, so just let it go.

Anyhow if you are anywhere near Retro UFO I suggest you hop on over there and pay Alexandra a visit. You will likely learn something and get to have some fun too.

You can also visit Alexandra's myspace page.
Posted by Unknown at 12:04 AM 2 comments:

Just a note to let you know that I've updated my blog with a post about what Nick Redfern has to say in regard to Jon Downes' upcoming book "Island of Paradise." It should be a really good read when it's published.

I've also included my thoughts about the kind remark Stuart Miller made about me at his "Alien Worlds" magazine website, and why I write the kind of articles that I do.