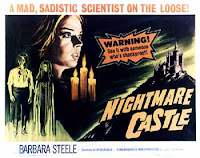 There's a great rumination of the mid-century pulp-gothic romance at the My Romance Story blog. It's no small wonder the genre came back into fashion in the 60s during the battleground of the modern feminist movement; the classic storyline of very flawed and/or 'evil' men victimizing or constraining a clearheaded heroine has obvious commentaries of the social climate of the time.
I've recently been interested in the depictions of the genre; I see many, many old paperbacks while bookscouting. In the Romance Story blog, the writer claims it is somewhat of a misnomer that most or all such novels sported a woman -in-nightgown fleeing from an old mansion with one window illuminated. She says very few did, but I have literally seen hundreds of such covers, both in person and on the web. Even with the ones that strayed from this exact cookie-cutter template, the covers still contained the elements of such.
With some covers, a woman may not be fleeing in a nightgown, but confidently poised in evening wear outside a large house. If there is no light in a window, there is a huge full moon as light source, or she may be carrying a candle. But, there are almost always the 3 elements of house, light, woman. Sometimes men are present, and sometimes the scene even takes place indoors, or immediately in front of the house. In these last 2 cases, the woman is usually in dire straights, either being attacked, or slumped over, post attack.
I suppose it's a rather straightforward and easy reading: women being oppressed somehow by a man. But maybe more thoughtfully, as we see with the art, by a huge, looming, antiquated house. This carries obvious ideas that were at the forefront in the 60s--women getting out of their houses and into the working world. There are also ideas of family life here, and probably can be seen to symbolize all the dynamics and changes that were going on regarding motherhood, birth control, divorce, etc. The ubiquitous single light source in the scene can be seen both emphasize that something drastic has taken place, and to light a path.

I have to say, I have a shameful guility secret/pleasure, and that is: I like to read vintage (meaning before 1970, roughly) gothic "romance" type novels. The covers are great, the stories, while not great literature, have the same plot: young woman (usually) orphaned, or at least, usually motherless (as in fairy tales) suddenly finds herself in a strange place. A new land, state, or city, and the reasons for her being there are usually due to something negative. A death in the family, someone falls ill, she's trying to shake off a failed romance, . . .

She meets up with eccentric characters: relatives she didn't she had, or only heard about, maybe an uncle or ancient aunt she met once when a young child. Now she has to live there.

For awhile, everyone pretends everything is normal; they try to act like everyday citizens. Of course, everytime the herione goes into town for tea and crumpets or something, she's aware of the werid looks and how people stop themselves before, as they might tell her, they "say too much."

Then our heroine starts to hears strange noises at night, or observes very odd and suspicious behavior among the servants (there are almost always servants) and she gets someone to open up a little. The uncle that died didn't die the way everyone said he did: heart attack,etc. but he was .... murdered! Or something. They say.

Meanwhile, while all this is going on, there's usually two love interest: the nice white bread guy who usually turns out to be the bad guy, and the gloomy tall dark silent guy who's really good.

Scenes of the heroine walking through moors at night or the woods behind the house or investigating the hidden passage ways in the house abound.

Usually, all ends welll. I forget the title, but one I read really annoyed me; got all the way to the end, and she ended up as a victim of the evil doers! I thought that was lazy writing, lol.

While in many ways this genre is seen as silly, (and it is in some ways) it's interesting as you say: for the symbolism. Light, women, house. Perceptive!

Regan: I think you should apply to be a blogger at My Romance Story! I've started collecting a few of the little paperbacks, just for the cool covers. I haven't read any of them yet. I did find a 1st edition hardcover of Master of Blacktower (barabara michael aka elizabeth peters) a couple years ago, and I do love italian gothic horror cinema, which have a lot of the same elements you describe, only a lot (LOT) darker.
We all have our secret pleasures..mine is watching Sylvia Brown on Wednesdays (when I remember) on Montel, and noting all her 'lying' body language and silly things she says. The other day, she was plugging one of the books she 'wrote' called secret societies. She said "And I did RESEARCH for this one." Montel said something like "what's in there?" and she starts scratching her face and hemming and hawing and says "skull and crossbones..." and couldn't really think of any others. Lots of research on that skull and CROSSbones. I digress...