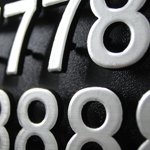 For someone who in her youth was almost utterly confused by numbers, I had, at the same time, been profoundly intrigued by them (and still am). Frankly, I was terrible at math when I was a child and easily discouraged from exploring math-based studies. This may have something to do with the fact I was the last person in my 5th grade math class to complete the 100 question multiplication test in under 5 minutes, and as a result was ridiculed by the teacher.

But it isn’t uncommon for individuals who are geared more towards creativity to have difficulty with mathematical problems, and my father often soothed my feelings of mathematical inadequacy by explaining that as an artist I interpret and utilize maths differently. Unfortunately, because of my troubles in 5th grade, it affected my placement in math classes though Jr. High. Then in my freshman year of high school, I was placed in pre-algebra. While this was still a level behind what most of the other students were learning at, it was this class that made numbers finally click in a way they never had before. It was also my scores in pre-algebra that finally had me placed in standard level maths.

And yet, while I struggled in my childhood with numbers, they had a deep effect on me. For instance, I was drawn to the number 4 for unknown reasons, and incorporated it's value in much of my artwork and later in my musical compositions. The one major downside to my interest in this number (and it's multiples), was that it manifested almost unbearably through an obsessive compulsive disorder. Ah, the number itself was not the issue, but it gave an existing condition something to lay law by.

Having lived a life that was no stranger to what is dubbed ‘the paranormal’ it was easy to want to attribute the number 4 to some greater mystery, as key or part of a key to the unknown, which (I thought) might better be explained through numerology and mysticism. And so I began to associate the number with God and the order of the heavens. Notably, the hierarchy of angels along with sub-classes and their varying positions on degrees of a circle (where God is a singularity).

Amazingly, I never fell into astrology, and even more surprisingly, never researched numerology in depth. Part of this had to do with my belief that no formula or combination of numbers could truly explain me or my future -- a belief that was probably more due to pride and arrogance than any real observation or study of New Age practices. And so, I concocted my own manifestos of meaning, borrowing bits and pieces from varied religions and myths. As a fairly religious girl at the time, I was also concerned that dabbling in areas like astrology was a dangerous invite to the Devil, and having no desire to tempt the wrath of God, I remained more or less on the outside of such things. As I grew older, my opinions about God inevitably changed, as did my opinion of the texts that spoke of God and our (human) creation. Some of this came from a more critical thought process, some from my experiences with love and loss, and some with my growing interest in science.

I had always been interested in science, but my early limitations in maths prevented me from understanding a lot about it. While I had been faring much better in the realm of mathematical equations in my later teens, it wasn't until after high school when a growing interest in musical composition finally took a lot of the mystery out of numbers. Especially in working with synthesizers and MIDI (Musical Instrument Digital Interface), and then later with digital sequencers. It was at this point that my interest in physics began to take off, seen now through less foggy spectacles. Where once I only saw confusion, I began to see the order you so often here about. I still have a tendency to reverse or jumble number sequences when viewing them, and if you stuck a formula in front of me I’d probably get a nose-bleed -- but the overall fear of numerical characters had lifted, opening up a door of deeper understanding.

My interest in science has done little to disturb paranormal events or ‘high-strangeness’ that have been prevalent in my life. For some, the opening of physics’ rigid doors have quashed their interest or belief in things like extraterrestrial visitation, ghosts, cryptids, and the like, but for me, it wasn’t so. Science has certainly guided me into more critical observation and thought, preventing me from instantly jumping to supernatural explanations for what might be explainable events, but I still am very much of the belief that we, even with our current sciences, are really only seeing a few pixels of what is overall, a much, much larger image.

Science has never had it very easy. Many may be incredulous that science hasn't always had free reign, but it was only fairly recently that science was not considered blasphemy in many parts of the world. This original resistance to science would have more to do with the scientific interest in discovering the origins and mechanics of the universe that run counter to traditional creationist theory, than merely the scientific employ of numbers and equations. But people still have reservations about science. For some, it conflicts with their religious belief systems, for others, it has failed to answer their own questions about existence or the nature of their own paranormal experiences. And though it is true that science has not been able to satisfy everyone’s need to understand the world, this is not a limitation of science itself, but rather a limitation of our current understanding of science.

All  of the science that is known is not all of the science that exists in the universe. Proof of that is in the constant progression of technological breakthrough and advancement. We are still learning, therefore, our understanding of science is still incomplete. I firmly believe that ‘numbers’ are at the heart of everything: from all that is visible to all that is not, and that what we consider 'paranormal' is really not para-anything. The paranormal is likely as natural as the revolution of the Earth around the Sun, or the gravitational pull of the moon on our oceans. It’s simply our inability to accurately observe these paranormal events, or observe and test them repeatedly, that makes them para to our 'normal.'

As much as one having a particular experience may argue, not all events labeled as paranormal are outside our own realm of the known. Sometimes it's really Venus in the sky. Sometimes the doors slam shut because it’s windy out. It's not always easy to tell when the ordinary has affected things in ways that appear extraordinary. To get to the heart of what might be a true 'paranormal' occurrence, you have to be able to rule out the explainable to even begin to understand the unexplainable. Once you abandon critical thought and jump to conclusions based on what is only immediately observable with the 5 senses, you may not be furthering an understanding of a phenomenon, only adding to it pure speculation. That may be good enough for an individual -- but with the hope for an overall explanation of an event, environmental effects and possible error in human perception need to be weeded out first.

There are some very bizarre happenings in our world. I do believe this. And sadly, science can't explain all of them right now, possibly even if the right data was staring us in the face -- because even with the right data, you have to know the right questions to ask in order to sort it all out. But I also believe that someday, if we survive long enough, science will advance to a level in which it will know the right questions to ask, and maybe then it will be able to explain that which it fails to explain now.

So, some scientists don't agree with your belief in the paranormal. Big whoop. Don't let it taint your opinion of the whole field - they often don't even agree with each other, so condemning the whole shebang based on the narrow opinions of a few loud voices seems silly. Even in the strict world of science you sometimes have to go against the popular belief in order to progress. If people had listened solely to Einstein, we wouldn’t be exploring quantum mechanics -- and that would truly be a shame.


Copyright © 2011 Deirdre O'Lavery
My site: The Interstellar Housewife
Posted by Deirdre at 4:15 PM

Thank you for this sharp-eyed and insightful assessment of science and how to work around its limitations. There are many limitations and mysteries. And disagreements galore. Sometimes ego and group think hold back progress. It's all part of a process that does not always advance smoothly.

Unfortunately, too many of us are conditioned to think of science not as a tool, but as some sort of holy shrine. If they read your blog, there is hope.

May I recommend a book, "The Sparrow" by Mary Doria Russell which explores the mortal and divine and philosophy vs reality. You will enjoy it.

Thank you for the very kind words - much appreciated!

I'm happy you enjoyed the article.

I'll check it out. Thanks for the recommendation =)